You Backed the BID!

The Clapham business community has become the 40th Business Improvement District (BID) in London following a majority vote by Clapham based businesses.

Clapham is set to become an even better place to do business as it was voted yes in favour of setting up a new Business Improvement District (BID), following a postal ballot on Friday 25 July 2014.

The result was announced on by Lambeth Council who carried out the ballot with 79% of businesses voting in favour and 89% in rateable value also in agreement. The ballot had a turnout of 40%. 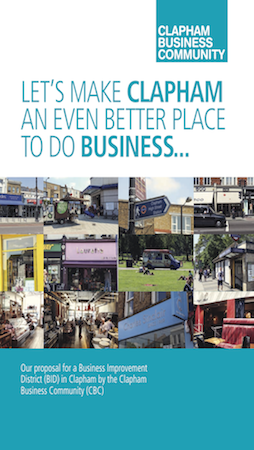 Why is the CBC running a ballot in July 2014?
If the CBC plans to create a BID, we have to run a ballot of eligible businesses. The ballot asks a simple question: Are you in favour of the proposals for the Clapham Business Improvement District? In order for the BID to come into existence, the simple majority of those voting must be in favour.

Why are late night businesses charged more in levy?
Clapham has a popular late night economy that attracts people from all over London and the South East of England.  To ensure the CBC has the resources it needs to better manage the night time economy we are proposing that businesses with a license to serve alcohol after midnight will be charged an additional levy of 0.75%.

How is the levy collected?
The BID levy will be collected through the current Business Rates system, but will be the subject of a separate bill.

How long does a BID last for?
A BID lasts for five years, meaning guaranteed investment in Clapham until 2019. If businesses want the BID to continue beyond 2019 you can make this decision with a further ballot process.

How can I be represented?
If our ballot in July 2014  is successful, the Clapham Business Community will be reconstituted as a new not-for-profit company limited by guarantee. The first AGM takes place in the first year following when the BID starts, which is on 1 October 2014. All businesses who pay the levy can become members of the new company.